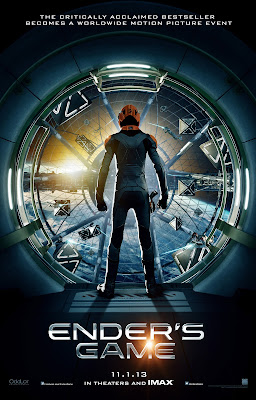 "Ender's Game" takes place 70 years after a hostile alien invasion left the Earth all but decimated. And in this exclusive clip direct from San Diego Comic-Con, Colonel Hyrum Graff (Harrison Ford) of the International Fleet addresses his new students (we, the viewers) at "Battle School," where future military champions are trained in the art of intergalactic warfare. Graff invites us to be inspired by the deeds of the legendary war hero, Mazer Rackham, who turned the tide of the war during the first wave.
"We will never forget what the enemy did," says Graff with the kind of stern gravitas that only Harrison Ford can deliver. "But we defeated them. And we will do so again."

The clip serves as a precursor to the elaborate interactive show awaiting everyone at this week's Comic-Con. "Ender's Game" will be featured at the Summit Entertainment panel the fan conference's hallowed Hall H room on Thursday at 3:50 p.m., where producer Bob Orci, director Gavin Hood, and cast members Harrison Ford (making only his second ever Con appearance), Asa Butterfield, Hailee Steinfeld, and Abigail Breslin will present more exclusive new footage from the film and participate in a Q&A.

But a Hall H panel is only the beginning for "Ender's Game" at Comic-Con. The film will also be featured at the Summit Entertainment booth in the convention center's Grand Hall, where various promotional items will be given to the first 120,000 attendees traversing the convention floor. Attendees will also have a chance to win "fast passes" to the most extravagant component of the "Ender's Game" Comic-Con package: the exclusive "Fan Experience," which lies beyond the walls of the convention center.

Fast pass holders can skip the line at the specially constructed "Ender's Game" exhibit outside of the nearby Hilton Gaslamp, which features eight unique rooms representing the many environments from the film, complete with set dressing consisting of original props and set pieces seen in the movie. Exclusive film footage will be on display on the exhibit's multiple LED screens and attendees will be able to interact with digital content, integrate photos of themselves into the Battle Room, and register to win a home makeover.
Do you have the right stuff for all of this? Before you embark on your "Ender's Game" Comic-Con journey, you can test your skills as a potential new recruit of the International Fleet with the Battle School Aptitude Test. Our future, of course, depends on it.

Get ready for the non-hostile invasion of San Diego by "Ender's Game." The film occupies theaters on November 1.