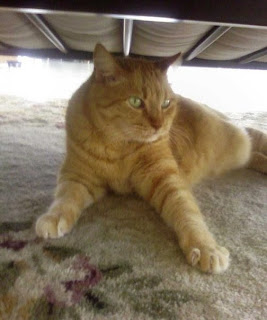 #LuckieTheCat #rockfile
In late August 2004, I was filling in on my station's morning show on Grand Cayman Island. Hitting the road before sunrise one morning, I heard a strange squeaking sound.  Living in a house almost surrounded by Caymanian "jungle", I was used to hearing strange noises and went on my way.  The next morning, I heard it again and discovered it was a really rough looking little orange kitty.  She was dirty and in bad shape but instantly wrapped herself around my feet. I already had two cats at the time and did not want to bring a stray into the house but I had to take her to the vet.

She was approximately 6 years old. Her teeth were broken and diseased, causing her quite a bit of pain. She had sustained some fairly serious injuries including a possible head injury. She also had a litter of kittens, at some point. To have her teeth removed and get her cleaned up was $600 CI (about $750 US). Wondering how a cat would survive without teeth, the vet was confident she would not have any problems as cats have a hard layer of gum tissue. (If you ever met Luckie, you know by her size, eating was never a problem for her!)

Shortly after bringing her home, Hurricane Ivan slammed into the island as a Category 5 storm, she was still wearing the cone. We lost 16 of the 17 trees in the yard and the car was never found. Since we had not yet decided on a name for this little scruffy kitty, after the storm she was called Luckie.  Had we not taken her in, there is no way she would have survived that storm. And at this point, we did not know how well she would recover. But she never wanted to go outside again. 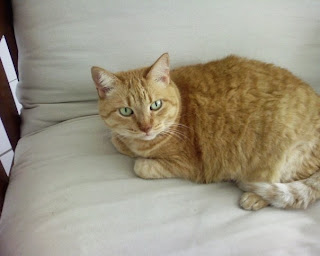 Luckie was still "on the mend" when we were able to evacuate her from Grand Cayman Island. She was putting on weight and starting to look like any other cat.  She did not do much more than squeak but she was the sweetest, most loveable cuddler ever. She was so happy just to "be". Every morning, while had my morning conversation with "mr. porcelain", Luckie was always draped across my feet...purring.  Even if Archer beat her there, she would wedge her way in. It got crowded in the bathroom sometimes. 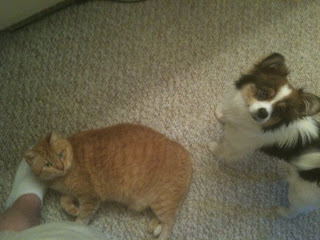 She adjusted to every situation like a trooper, no matter how tough. She always got motion sick but once at the destination, she was up and ready to go. She moved from Grand Cayman to Atlanta to the Florida Keys and to Coconut Creek over the last nine years.

When there were three cats in the house, she kept mostly to herself but always found times when laps were vacant and she could get some attention. She was also very defensive of us and the other pets. Scrappy even. I would warn Archer while playing with her that she had lived in the wilds of Grand Cayman Island and probably knew tricks he didn't. She loved our two dogs just like they were her cats. 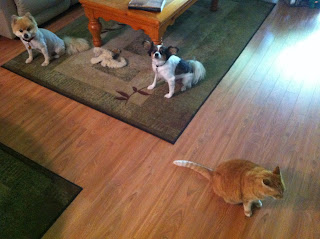 Since Sebastian passed last December, Luckie had "stepped up" her love factor. When we come home, she came to greet us at the door like Remy and Archer. And if you made it into the house before she knew it, once discovered, you would hear her excited little squeak and she would come running. She waited at the door for the dogs to get back from their daily walks.  When we were home, she was always around. 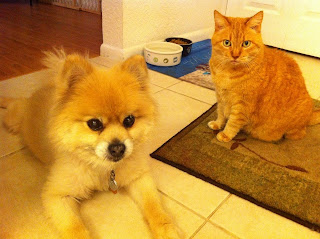 She and Archer would stalk and chase each other around. I think the "toothless wonder" always won. She loved Remy but he was not too sure about her...he eventually realized she was trying to pet him, not claw him. She spent countless hours on our screened in back porch, it was her favorite place. Looking at the nature preserve behind our house, maybe it reminded her how lucky she really was.

A friend once told me that Luckie was the lucky one to have found such a wonderful home. But we were the lucky ones to have shared time with Luckie the cat.
You will be missed, little girl. 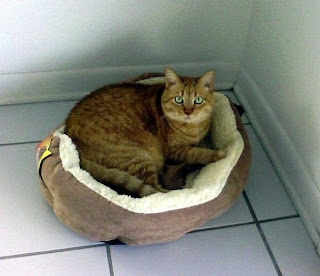