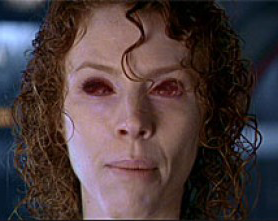 #halloween #horrormovies #rockfile
Keeping with the spirit of the day, I put together this list of my favorite Horror flicks.  Some you know, some you may not and I certainly may have missed a few. Just got the idea this morning and I picked 13 newer ones and 13 classics, listed in no particular order.


Event Horizon
This sci-fi flick is basically a Hellraiser-type haunted house movie in space and I love it! Freeze frame those gory scenes for even more effect. I understand some of the actors had nightmares after...

Let The Right One In (2008)
Although I love the US remake, the original is a bit creepier. The book is also excellent!

Drag Me To Hell
Sam Raimi's return to horror is a great ride.

The Strangers
Nothing supernatural, more frightening because it could happen... and supposedly did.

High Tension
This gritty French film is exactly what the title suggests.

Martyrs
Of all the torture-porn movies that followed Hostel, this one bests it.

Splinter
This little "under the radar" thriller is a ton of fun.


The Mist
Even Stephen King likes the ending better than his own.

Sinister
We saw a sneak preview of this with the director and writer last year and loved it. One of the better scary flicks of late.


An American Werewolf In London
One of the best films to mix comedy and horror, it's still funny and scary!


Evil Dead
The new reboot is worth watching but Sam Raimi's original is still the one to watch. (Folled by 2, same movie plus dark humor.)

Night Of The Living Dead
Few films touch the dread felt in the original.

Dawn Of The Dead
One of the few sequels that is better than the first. (The remake is also a favorite!)

The Thing (1982)
Creeped me out in the theater, I still get chills today.

Alien
SciFi Horror at it's best.


The Exorcist
Shocking in it's day, still a very creepy flick.

Texas Chainsaw Massacre
The original is still one of the best.

Invasion Of The Body Snatchers (1978)
The dread I felt as a 12 year old in the theater still hits me when I watch it now.
Hellraiser
While the sequel is packed with even more gore, the original is creepier. Clive Barker is working on a reboot himself. Looking forward to it.

A Nightmare On Elm Street
You know the Freddy rhyme still creeps you. 1... 2.. Freddy's coming for you.

Kwaidan
Some very scary scenes in this 1964 classic


All of these are available on Blu-ray, DVD and most of them are streaming. Enjoy!

Posted by Scott Hamilton #Rockfile at 2:09 PM No comments: