THE CROODS - My Review (video) 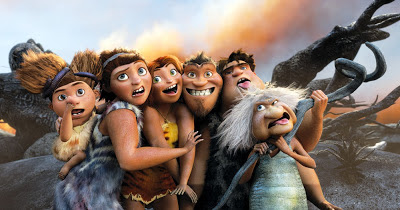 When I go to see a movie in the local cinema, it is usually after a lot of research and deliberation. Is it one that can wait for viewing in our home theater or does it require the theater experience?  More often than not, waiting to enjoy a movie on our very capable Blu-ray/Plasma setup is the way to go...and far less expensive.

Two weeks ago, I won an invite to a sneak preview of Olympus Has Fallen from IGN and gofobo, but it was a Wednesday evening, an hour away in Miami...just didn't seem worth the drive.  Because of my account on http://www.gofobo.com/, I was also invited to a preview of THE CROODS this past Saturday morning at our favorite theater close by.

Having not even seen a trailer for the movie, I checked Rotten Tomatoes where THE CROODS was hovering around 60% positive, with ony a few reviews posted. (it has since risen to over 80%!) Most reviewers thought the film would play better to younger viewers, with little for adults to enjoy.  Lisa wanted to see it and although I thought I would hate it, I said nothing and went. How bad could it be, right?

Boy, am I glad I did as THE CROODS is one of the better animated films we have seen recently. Although it will not give Pixar's best a run for their money, THE CROODS is a very entertaining prehistoric experience. 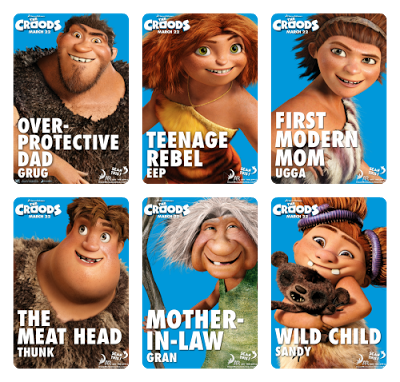 Surprisingly, there are no talking animals and I had no idea who the voices were. It took longer than usual to guess, as I was fairly caught up in a beautiful 3D experience wrapped around the simple but effective story. Nicolas Cage, Emma Stone, Ryan Reynolds and Cloris Leachman give great vocal performances throughout and the animation is fast, furious and colorful.  It is one of the better 3D experiences I have had in the cinema. 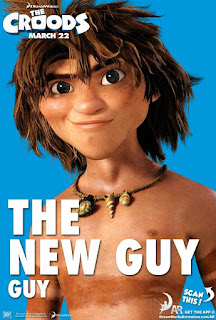 The children in the packed preview laughed and cheered during the entire film and a round of applause rose during the credits.  Young and old seemed unanimous in giving the film a proverbial "thumbs up".

On my scale, I would give it four out of five and will probably add it to our Blu-ray library.

It opens this in theaters this Friday, March 22nd. 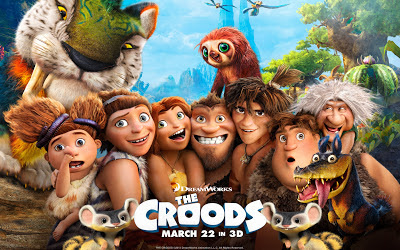 Posted by Scott Hamilton #Rockfile at 4:13 PM No comments: